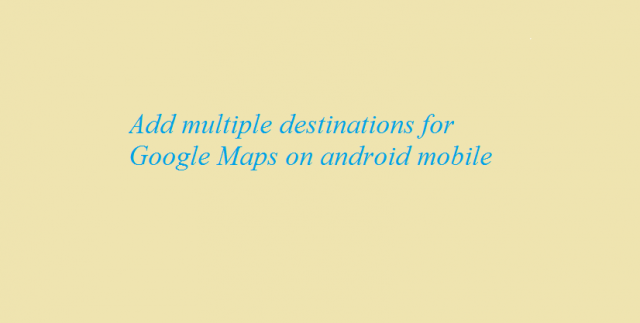 Generally, Google maps for Android smartphone provides directions between a single source and destination. The mobile app is not having the future to provide navigation for someone travelling from place A to B via C, D or E or multiple destinations. However, Google Maps support multiple destinations on the desktop.

Google might soon and support for navigation for multiple destinations on maps for Android until then, here is the solution what users can do

On the desktop, open Google maps and make multiple destination searches to do so, select a source and then add the immediate stop, instead of Final Destination. To add Final Destination, click on the small plus button opposite to “options” on the left-hand side of blue Panel. on clicking, it will ask the user to input another destination. Add final destination.

In the meanwhile, Google Maps on Thursday introduced a new feature targeted at by users in India. Now the people in India get traffic alerts, once the navigation mode is switched on. this featured introduced on the updated Maps app will offer you spoke alert about coming traffic conditions. The map of will also suggests alternate route, including giving explanations for why one is recommended.